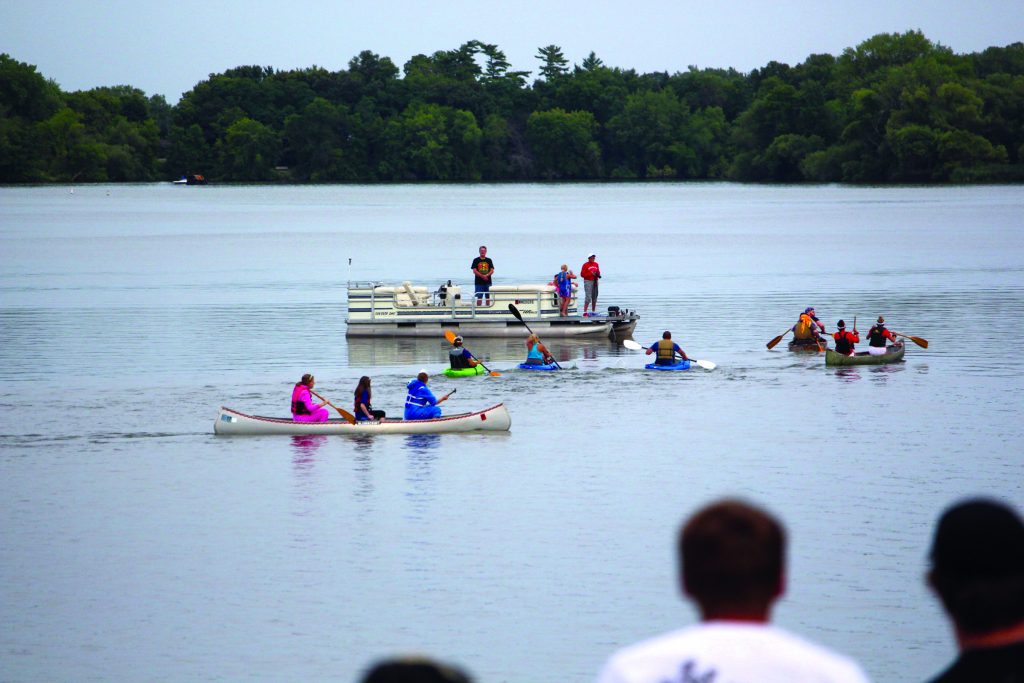 Contestants in the canoe and kayak race during the Winsted Summer Festival Aug. 9 race toward the finish on the shore of Winsted Lake.

People in Winsted and surrounding communities look forward to the second weekend in August, because that’s when it’s time for the Winsted Summer Festival.

The 31st annual Bratbusters took place the first day of the festival. This event is an opportunity to connect with friends and neighbors while enjoying food and beverages at Mill Reserve Park by Winsted Lake. Activities for children include a fun run, treasure hunt, face painting, fun bounces, and a youth bean bag tournament.

Saturday morning of the festival always starts with the Winsted Run Around the Lake (about 4.2 miles). In 2019, there were 77 participants. Gracie Mallak, 17, of Winsted won first place, with a time of 25:28.

In the children’s pedal pull, the overall winner was Alicia Schoenthaler of Dassel, who received a cash prize of $30. All those who participated received a can of pop of their choice.

Waverly Stueven of Howard Lake was the winner of a random drawing after the event and received a gift certificate for a free children’s meal at V’s Grill in Winsted.

Each year, Winsted royalty are crowned the last day of the celebration. The 2019-20 Winsted Ambassadors are Emma Weege, Alexis Johnson, and Katelyn Waataja.

The grand parade also takes place the final day of the festival. In 2019, the parade was led by grand marshals Ron Schauer and the late Gary Schauer.

The Winsted Summer Festival committee  is looking forward to another successful event in 2020.