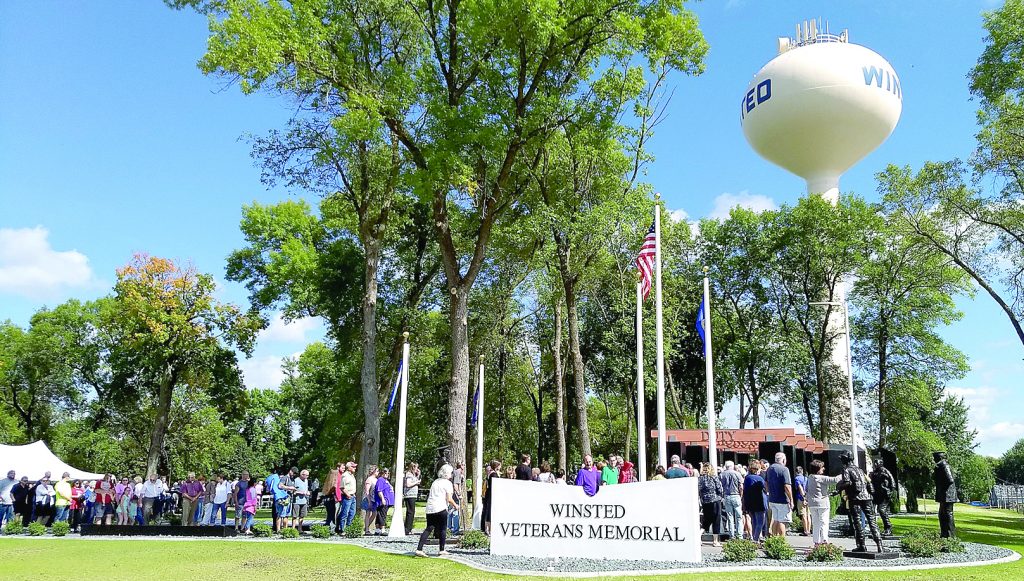 This is a design rendering of the new Winsted Veterans Memorial in Hainlin Park.

A dedication ceremony Sept. 15 for the new Winsted Veterans Memorial drew a large crowd of attendees. The memorial is located in Hainlin Park in Winsted, and was designed by local resident Mitchell Littfin.

Visitors enter the memorial by following a paved walkway that leads to a circular flag court with five flag poles, and five bronze statues, representing the five branches of the United States military.

The path proceeds beneath five large wooden archways. The top beams are inscribed with the words: duty, honor, country, valor, and courage.

The pathway ends in a second circular court, the Pentagon Court, ringed by five large pillars with more than 400 plaques containing veterans’ names.

The words “never forget” are inscribed on a wood beam overhead.

Kielkucki described the history of the memorial’s construction, beginning with its initial conceptualization in 2016, and acknowledged many Winsted residents who were involved in its creation. He called it a stunning and unique memorial that embodied remembrance, sacrifice, and service.

Kielkucki described the memorial’s features, including five large pillars containing 421 plaques, which are inscribed with the names of veterans, and were purchased by veterans and their families to help fund the construction of the memorial.

City of Winsted Mayor Steve Stotko described the memorial in similar terms, referring to the design as “stunning, special, and sacred.”

Remembering the fallen, Kielkucki read the names, rank, branch of service, combat era, and age of 13 local heroes who died in service to their country.

Following the dedication ceremony, attendees were encouraged to walk through the Winsted Veterans Memorial.

Among the features of the Winsted Veterans Memorial, five life-sized bronze statues have been installed to represent the branches of the armed services.

A sixth statue is positioned in the center of the memorial, in the Pentagon Court. It is called the “Leave No Man Behind” statue, and portrays a soldier carrying a fallen soldier on his shoulders.

Veterans and their families are encouraged to purchase a veteran name plaque to be permanently installed at the Winsted Veterans Memorial pentagon court.

The plaques are available to honor any veteran, living or deceased, who served honorably on active duty, in the reserves, or the National Guard, in wartime or peacetime.

The 11-inch-by-5-inch plaques are made of brushed stainless steel, etched with the veteran’s name, branch of service, and period of service.

The cost of each plaque is $150, and the proceeds go directly toward  the ongoing operations and maintenance of the memorial.