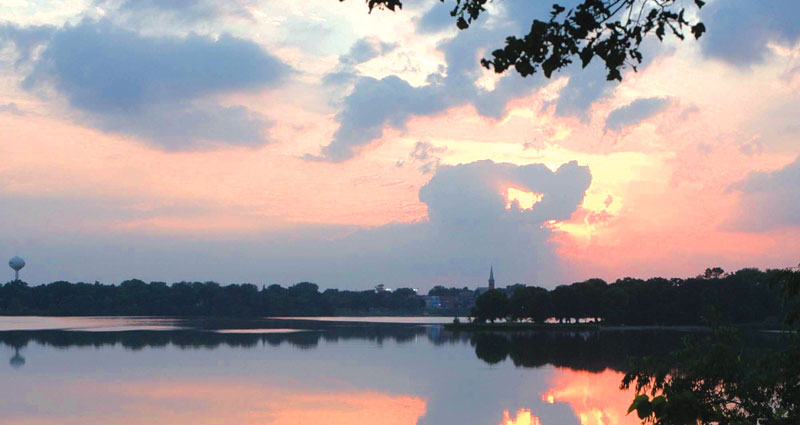 The Winsted Lake Watershed Association was formed in 1979, and has a mission to provide leadership in improving and protecting the quality of Winsted Lake and its watershed for present and future generations. Currently, there are more than 200 members and businesses, who have a strong commitment to Winsted Lake, and are continually evaluating the needs of the lake, its shoreline, and watershed to achieve its mission.

Located in the heart of Winsted, the lake is 376 acres; and its watershed is approximately 18,000 acres. The majority of the watershed is agricultural land, according to association president Bev Schmitz.

The association has goals to establish buffer strips of native plant species along watershed ditches, as well as a water runoff filtration system, to prevent pollutants from entering the lake, according to Schmitz.

A project taken on by the lake association, with permission from the Minnesota Department of Natural Resources (DNR), was to reintroduce to the lake native plant species, which had been lost due to urban and rural water runoff. The association has been trying to re-establish soft-stem bulrush in three different locations throughout the lake each year since the spring of 2011. So far nothing has taken root.

Although the lake is only an average of 12 feet deep, winter fish kill has been non-existent with the use of a winter aeration system. Numerous fish species are supported by Winsted Lake, including walleye, northern pike, largemouth bass, crappie, bluegill, perch, channel catfish, bullhead, and carp.

Successful stocking of walleye in the lake began in spring 2011, with 376,000 walleye fry being placed in the lake by the DNR. Stocking also took place in 2013, and the lake will again be stocked in May 2015.

Another goal of the association is to control the spread of invasive, non-native vegetation in the lake. Curly leaf pondweed was discovered in Winsted Lake in 2005, and the lake received chemical treatments in 2008, 2009, 2010, and 2012 to rid it of the invasive species. They have been successful controlling this weed and have not had to treat the lake in 2013 or 2014. The lake is surveyed every spring by the DNR and our treatment company, PLM.

The main fundraisers for the association are the annual spring plant sale and events during the Winsted Summer Festival. An annual lakeshore cleanup takes place the first Saturday in May. Meetings of the association take place the first Monday of each month at 7 p.m. in the Vollmer Room downstairs at Winsted City Hall. All meetings are open to the public. We do not meet in Jan, Feb, or March. Officers for 2015 are Dale Maus, president; Yvonne Maus, vice president; Terri Johnson, secretary; and Merrybeth Burkman, treasurer.

The cost of membership in the association is $25 per family or $100 per business annually, which includes a bi-annual newsletter, and is open to anyone interested in contributing to the quality of Winsted Lake and its watershed. Those interested should contact membership directors Jan Cartwright at (320) 485-3747 or Mike Mahoney at (320) 485-7447. Dues may also be sent to WLWA, PO Box 577, Winsted, MN 55395.

For more information, visit the association’s website at www.winsted.mn.us/pages/watershed.html.